Cady Langdon ’16 and Angela Marsh-Coan ’18 were involved in sports in high school, wanted to pursue a career in sports and are now working in dream jobs for the most popular professional sports league in the world, the National Football League.

But for Langdon and Marsh-Coan, both graduates of the sport management program in the Falk College of Sport and Human Dynamics, that’s not the best part of their journey. The best part, they say, is that through their NFL jobs–Langdon as health and safety senior coordinator and Marsh-Coan as social justice coordinator–they are making a positive impact on countless lives.

“Since I started working with player health and safety (in 2017), I feel my work is impacting the game and the players’ lives and making a safer game for fans who get to see the players they love on the field rather than on the sideline,” says Langdon.

Marsh-Coan works for the NFL’s Inspire Change initiative that supports social justice programs and provides funding for organizations that assist communities that have been historically underrepresented and excluded.

“I enjoy what I’m doing, I’m getting to make an impact and the fact that this role and opportunity even exists says a lot about the commitment that’s being made to this initiative,” says Marsh-Coan.

Langdon and Marsh-Coan will return to Falk to discuss their prominent NFL positions during a “Sport Management Alumnae in the NFL” panel discussion on Oct. 15 as part of the fifth annual sport management alumni event, “SPM Alumni in #SportsBiz: Now We’re the Pros.” Nicole Cost, internship placement coordinator for sport management, arranged the panel discussion because she knew of several Falk female alums who are working for the NFL or with NFL teams.

Other members of the panel include Hannah Sanford ’16, community engagement manager for the Seattle Seahawks, and Jordyn White ’17, public relations specialist for the NFL (White majored in communication and rhetorical studies in the College of Visual and Performing Arts and minored in sport management).

Other Falk alumnae working in the NFL include Lori Robinson ’09, player engagement for the Baltimore Ravens; Kaitlynn Miller ’21, who was recently hired by the Washington Football Team as coordinator of strategic partnerships; and Caroline Davis ’20, a marketing associate for the NFL based in Los Angeles who’s pursuing her master’s in communication and media studies from the Newhouse School of Public Communications. 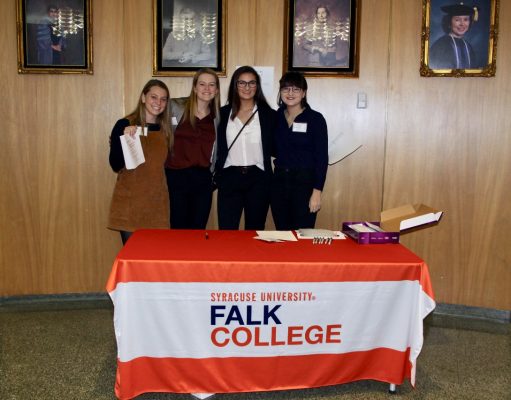 “Since the inception of our program, we’ve cultivated opportunities for our female students to become change agents in sports. As we celebrate the 50th anniversary of Title IX, I could not be prouder of the accomplishments of these pioneering women working in the NFL,” says Michael Veley, founding director and chair of the Department of Sport Management. “Very few universities, if any, have so many female graduates working in managerial roles within professional football.”

The keynote speaker for the alumni event is Deidra Maddock ’97, vice president of sports brand solutions, Disney Advertising Sales for the Walt Disney Company and a senior advisory council member for the Department of Sport Management. Another panel discussion will feature alumni who have started their own businesses, and more than 20 alumni representing the NBA, MKTG, Genius Sports and other companies will engage with more than 150 current students in professional workshops following the panel discussions.

“The event began five years ago when I wanted to create a professional development opportunity for our students navigating careers in the sport and entertainment world,” Cost says. “When I started to brainstorm employers to connect with, I realized that we had sport management alumni working almost everywhere our students wanted to potentially be one day. The best people to help guide our current students are alumni; we love keeping the sport and entertainment industry Orange!”

While in high school in Washington, D.C., Marsh-Coan was a student manager for sports teams and that sparked her interest in sport management. She attended an open house at the Falk College and was sold on the idea that it offered the support of a small liberal arts college while providing the excitement of a larger university. 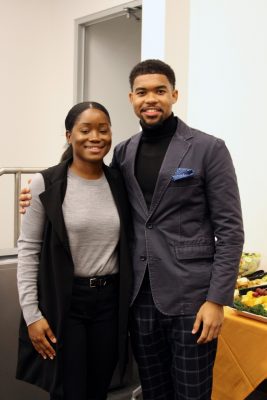 Charma Harris ’13, a consultant for The Clearing, and Elijah Biggins ’16, integrated marketing strategist for Genius, were two of the alumni to attend the last in-person Falk alumni event in 2019. Harris and Biggins are members of sport management’s Emerging Leaders Council.

“I worked as a marketing intern for [Syracuse] basketball and football games, while also serving as the community service chair for the Student African American Society,” Marsh-Coan says. “When I graduated, I realized I could pursue both my interests in sports and my passion for community engagement. I’m grateful I had the opportunity to explore my interests at Falk and in the context of what I could be doing professionally.”

Marsh-Coan worked for the NBA’s Washington Wizards and Atlanta Hawks before joining the NFL in November 2020. The timing was right for Marsh-Coan as the Inspire Change initiative took on added importance in the wake of the social and cultural unrest that was occurring throughout the world.

“My primary role as the social justice coordinator is to assist the social responsibility team on all things related to Inspire Change,” Marsh-Coan says. “On a day-to-day basis, I manage communications between the league and our 27 Inspire Change grant partners.”

The NFL’s social responsibility team works in collaboration with the Players Coalition, club owners and NFL players to “ensure that access to opportunity is a reality for all.”

“I’m definitely grateful to be in this position and for the commitment [the NFL] has made to this work,” Marsh-Coan says. “The team is growing and evolving to tell the story of these partner organizations, and we’re looking to continue to be authentic in this space.” 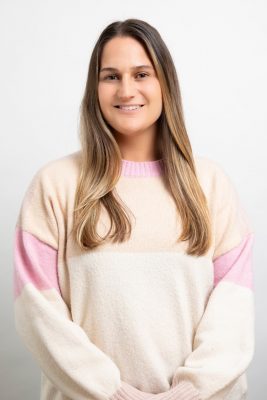 Langdon, who’s from Westchester County, New York, in the Hudson Valley, wanted to transfer for her junior year of college and had Syracuse at the top of her list. Langdon and her father, alum Simon Langdon, went to a basketball game on their visit and “that’s really all you need to sell you on the school,” Langdon says, laughing.

Langdon, who played soccer in high school, was accepted into the sport management program and jumped right in by joining the Sport Management Club and participating in fundraising events such as the Annual Charity Sports Auction. She spent the summer and fall of 2016 on her capstone project with the NFL’s Buffalo Bills as a graduate assistant member of the events and guest experience staff.

“I was able to meet great speakers at Falk from many professional sport leagues who I’m still connected to, and in my classes, we covered ticket sales, marketing and all the areas you can get into in sports,” Langdon says. “My capstone with the Bills came through the help of Syracuse internship coordinators and staff who have so many connections and they’re constantly monitoring job opportunities for students.”

Langdon joined the NFL’s broadcasting department in 2016 and spent a year working with clubs to find stories that could be highlighted on the broadcasts. She then transitioned to player health and safety, where she focuses on innovation and protective equipment.

Working with experts such as data scientists, engineers and epidemiologists, Langdon’s team collects and organizes data and performs video reviews of injuries that occur in an NFL game (taking into account factors such as weather, playing surface and the type of cleats, helmet, shoulder pads and other equipment worn by the player). The data is central to informing rules changes and improving protective equipment–two centerpieces of the league’s efforts to reduce injuries, specifically concussions.

The NFL, in collaboration with the NFL Players Association and appointed biomechanical experts, conducts laboratory testing for all helmets. The results are displayed on a poster and the helmets are ranked as green (best to use), yellow or red (prohibited). Langdon says at the start of the 2018 season, 41% of the players were wearing helmets that ranked in the top-performing green category.

At the conclusion of the 2020 season, because of this research and a commitment to educate players, 99% of the players wore the top-performing helmets and the league realized a 25% decrease in concussions over the past three years.

“This has been a large effort, and over the years we’ve made helmet choices a prominent part of conversations in the locker room between players and equipment staff,” Langdon says.

‘Headed in the Right Direction’

Making a positive impact through their NFL positions isn’t the only thing that Langdon and Marsh-Coan have in common. Their messages to students during the Oct. 15 alumni event will also be similar: Find out what you want to do and go for it.

“It’s OK to get a job in one area and switch to another,” Langdon says. “I started in events with the Bills and then broadcasting and now health and safety, so you don’t have to feel you’re stuck in one position for the rest of your career. Sports provides you many opportunities to dive into different areas.”

Marsh-Coan says students should take advantage of Falk’s vast network of alums and she credits her Falk connections for helping her land jobs in the NBA and NFL.

It’s that attitude that has led Marsh-Coan, Langdon and other Falk alumnae to prominent positions in a once-archaic league where NFL used to stand for “Not For Ladies.”

“My department alone is made up of four women out of six and there are so many women here in executive and senior vice president roles,” Langdon says. “It’s amazing to have mentors in those spaces.

“There’s a lot of progress to be made and I hope to see women being head coaches one day, but we’re certainly headed in the right direction,” she adds. “You just have to be confident and go with what you know and make sure your voice is being heard.”