If you’re a fan of sports simulation titles, then chances are you are already familiar with Wolverine Studios. The development team behind the Draft Day Sports series of simulation titles that include, most notably, their yearly releases of DDS: Pro and College Football and Basketball. Having Wolverines Studios for years, I understand their methodical approach and staying true to their formulaic patterns of refining what is in the game and gently broadening the inclusions of new options. This brings us to my Draft Day Sports: Pro Football 2023 review.

There is nothing wrong with this approach, as many development companies follow the same “if it isn’t broke, don’t fix it” pattern. Sometimes though, developers like to take a big swing for the fence in hopes of seeing a constant evolution of their titles, and that is what Wolverine Studios has done with two of their annual titles in DDS: Pro Football and Pro Basketball.

Pro Basketball has seen a complete revamping of its graphics by offering 3-D options for the on-court action, which I will cover soon in another article. For DDS: Pro Football, the significant change comes in the form of a new mode, at least new to this series.

Along with the standard game modes always found with each release, players will now have the ability to choose a single-player focused mode titled Road to MVP where you control a player and guide him through the happenings of his career, both on and off the field.

If you are already familiar with the pro football world that Wolverine Studios has created, you will feel right at home with the system in place for the newest versions. For those looking to jump in this year or are still just feeling it out in the proverbial showroom, you have a deep and authentic experience waiting for you.

As a seasoned veteran of this series, PF ’23 felt more about some quality-of-life improvements in the franchise area, something the studio is very good at. As you can see from the list of what’s new that I have listed above, a lot has been improved or brought along that helps smooth out the edges of an already solid experience. 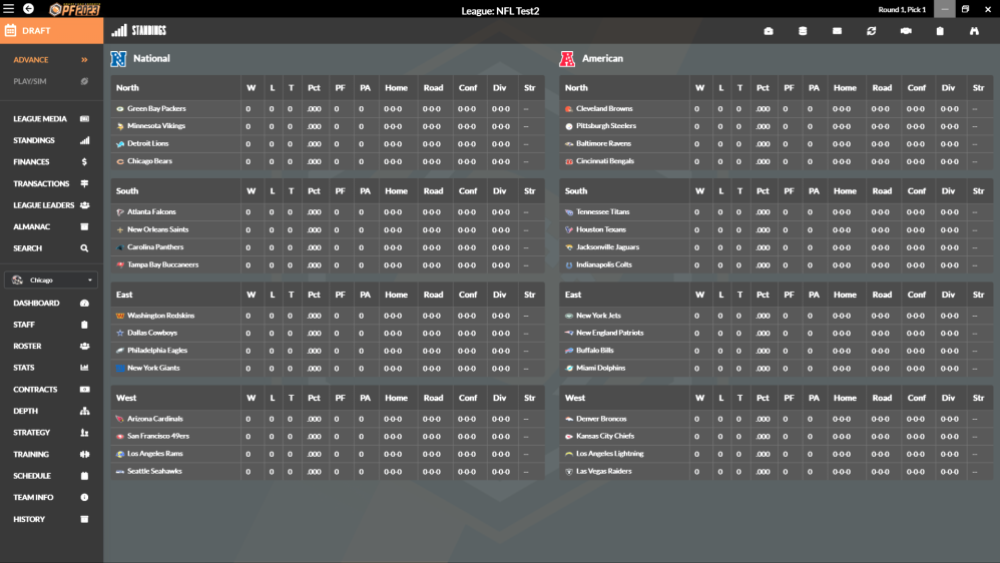 From the start, you can choose to control a single team in the league or choose to control all 32 teams and set yourself up in more of a commissioner-type role. Regardless of your approach, DDS: Pro Football ’23 takes you from the draft to the preseason, the regular season, and the Big Game. Along the way, you deal with players, injuries, signings, trades, and salary-cap maintenance while keeping one eye on the current season and one on the organization’s future.

This has always been where I spend the majority of my time with the DDS: Pro Football series, and it is again this year. It will not feel that different if you’re a seasoned veteran of the series, but that is fine. The formula that Wolverine Studios utilizes here is tried and true, and the idea is to continually refine and upgrade this mode

Hours can be lost in franchise mode, and the ability to dig deeper into my team’s workings and the sport’s minutia draws me into this mode. The ability to edit, mod, create, and watch things unfold is at the heart of my enjoyment. 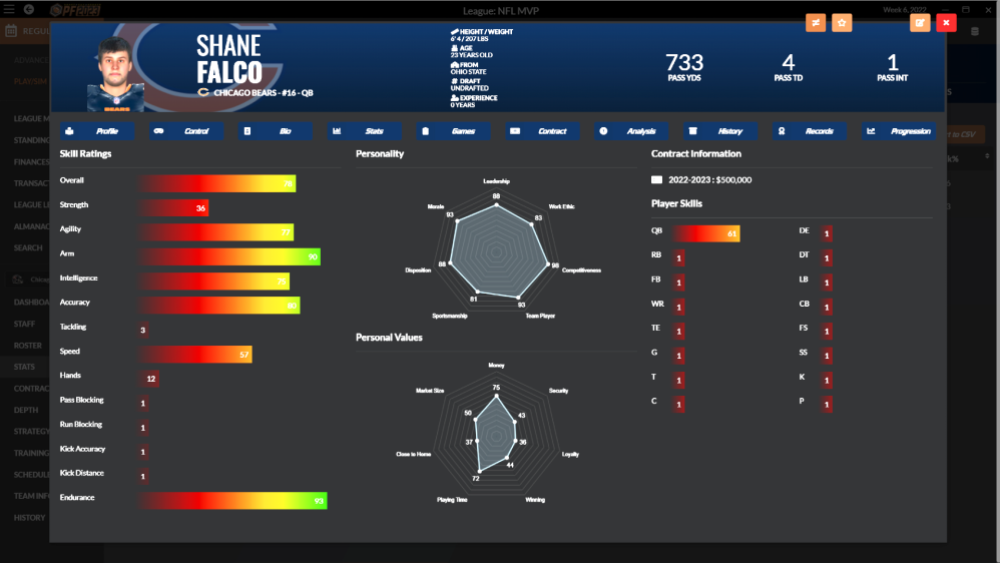 That said, one of the best aspects of this series is the option to be involved with a ground-level approach and watch how every single play unfolds.  You can also choose a more GM-type role and see how the season plays out while delegating some of the more mundane aspects of the sport and hope you have the right staff in place.

As much as I enjoy DDS: Pro Football ’23, there are still some issues with how the AI handles rosters that seem a little questionable. I also ran into a few animation glitches, which I will cover later, where players would bunch up together. The developers are aware of and constantly working on these problems, and of course, I am reviewing this game as it transitions from first access to full release.

I mentioned earlier about Wolverine Studios delivering a new mode this year in the form of Road to MVP. Instead of taking control of a single team or the entire league, Road to MVP allows you to assume the role of a single individual and guide him through his entire career, for better or worse.

In Road to MVP, you create your player, name him, and have the option to choose the style of player and position you want to see him at. I chose fictional QB Shane Falco from Ohio State and assigned him to my Chicago Bears. Even though I assigned him to my beloved Bears, the game lets you enter the draft and see where the chips fall. 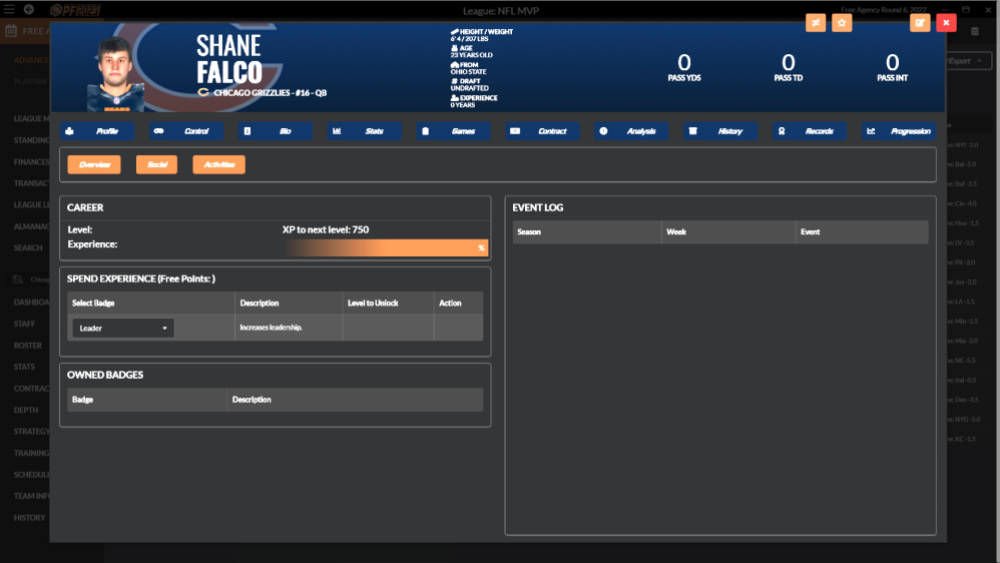 Now, just because you enter the draft doesn’t mean you will be drafted, and if that happens, UDFA is the road you take and hope for the best. After assigning my QB, you run through a series of training programs and hope you get a chance to prove yourself on the field. Do enough, and you earn XP to apply to the player and help him grow in areas of need.

The new mode allows you to see how you perform on the field, and you’ll also have a media presence and team influence, along with input on contracts.

The mode does an excellent job of delivering a singular game style, and one that offers a different type of experience than the typical franchise mode in the Pro Football series. Is Road to MVP something that is going to add longevity and freshness to the series? That answer is yes, and while there is more that can be added in the upcoming iterations, Road to MVP delivers something new and does so without linearity holding it back.

I mention this often with Wolverine Studios titles, and it is as accurate today as the first time I wrote it. The ability to run a fictional league or a league that replicates the NFL is part of the overall excitement for this series. Some choose to create an entire world with no expectations or prior assumptions based on real-world players and teams. For me, though, I prefer to utilize the NFL real-world mod that recreates the entire NFL and the option to have real players, real coaches, and actual schedules. 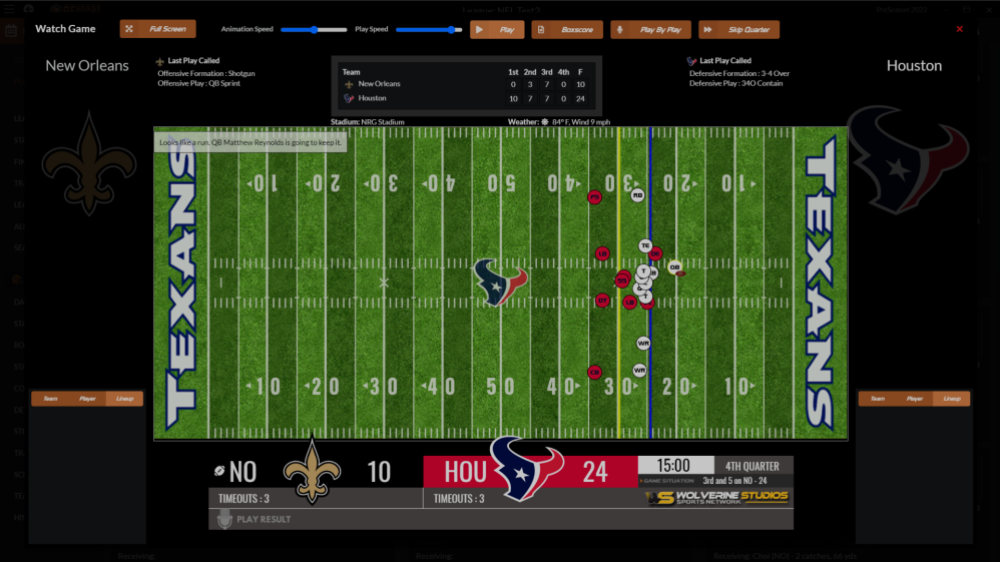 I enjoy running through an entire season with current NFL players and accurate rosters and then shaping the team. It also still allows me to put my stamp on the team through player creation and the draft. It’s not hard to apply the mods, and the community is always there to help. All the information I have talked about is listed and linked below.

I have spoken about this before, and the presentation in the game is done very well, but it has become stagnant. I understand the title is a simulation, and taking control of your players will never happen, and that’s fine. When you concede the lack of on-field player control, the visual immersion factor needs to be delivered in some form somewhere else. The game does a solid job presenting the draft with a mock stage and analysts giving their opinions on the current selection, trades, and a player’s stock rising or falling. I would love to see this type of presentation in the game each and every week. A small weekly show breaks down the current week’s games, the biggest matchups, and a post-week wrap-up show that discusses the upcoming week’s action. Again, the presentation in Draft Day Sports: Pro Football 2023 is solid, I just want to see more of it to create a deeper level of immersion off the field.

This is a minor issue, but I witnessed it enough to warrant mentioning it. Occasionally the animated circles representing each player on the field during the game would collect and become motionless during the play. This isn’t an issue I have dealt with in previous versions, and while it’s not going to ruin the experience for anyone, I do hope it is addressed in a small patch. 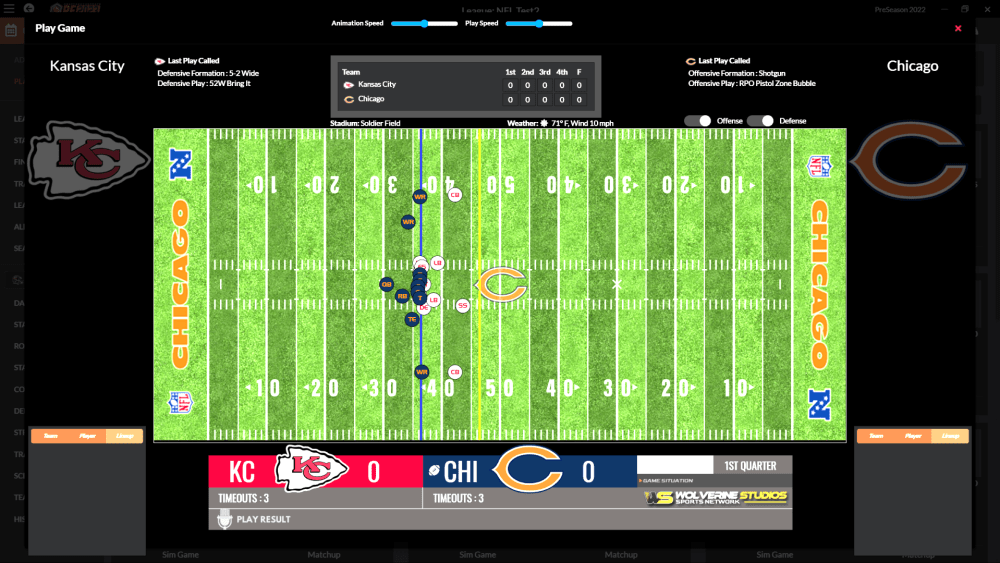 I would also like to mention that my hope moving forward is that Wolverine finds a way to implement the new 3-D gameplay found in DDS: Pro Basketball 2023 in this football series. The current 2-D style works fine, but adding the new 3-D rendered models would open up the experience and broaden the fan base. 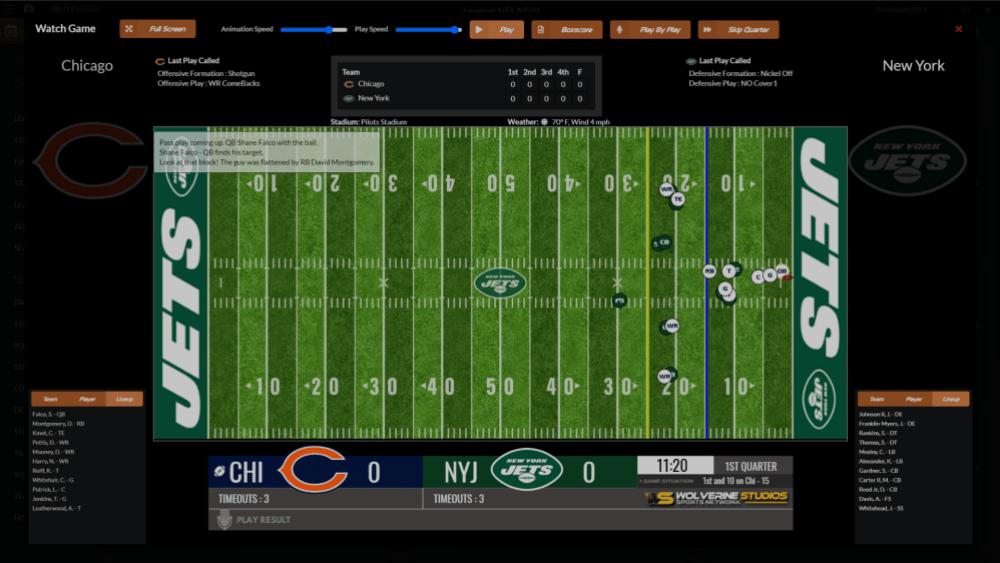 Controlling a single team or all 32 and guiding a league through an entire season, offseason, and repeating it feels as strong as ever. Adding Road to MVP adds a new way to play and another reason to keep returning to DDS: Pro Football ’23 throughout the year.

Participate in the community by clicking on this link. You can download and install the real-world NFL mod by following the link listed here, and it has a complete set of instructions on how to install it.